A Family Tradition of Working Leather

Bryan Wildt grew up in Alton, Illinois, helping his family with their leather repair shop. His father had started as a salesman before working his way up to business owner. Bryan helped out during the evenings and weekends as a teenager, learning the trade.

He decided to move to Arkansas while he was in his early 20s, and he left the leather business behind in Illinois. “I didn’t know at the time exactly what I wanted to do,” he explained. Then his parents moved to Star City, AR. “They wanted to be closer to me,” Bryan said. “Dad was burnt out on his business. He had a huge business there and he was looking to slow down some.”

They brought their machinery, and Bryan started thinking about leather work again.

The family opened Wildt Leather in Star City 25 years ago. Bryan has learned how to adjust with changing demands and the impact of technology, all while staying true to the mission of quality products. The first big change came in 2008. Until that time, Wildt Leather had focused on saddle making and saddle repairs in southeast Arkansas. “When the economy got so bad, the whole equine business just died,” Bryan explained.

women’s shoes on the retail side. Then, a few years later, Amazon came along. “We had to

make a move,” said Bryan. Now, the store is located in Benton, AR, and Bryan is constantly adding new designs and quality leather products, focused on the classics of belts, holsters, knife sheaths, and bags. But even with all the changes, the focus has always been on high quality leather, built to last.

Wildt Leather is about eight blocks from Harps Food, and five minutes off the Interstate using

The hours are Monday through Friday, 10 to 6 pm, Saturday by appointment, and closed on 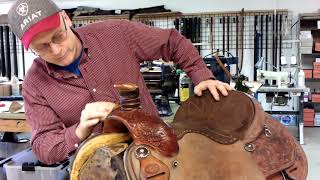 Behind The Scenes at Wildt Leather